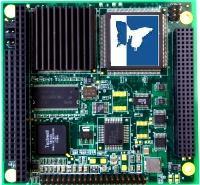 The MPEG4000WA PC/104-plus Watermark Authentication MPEG4 Video Codec adds watermark authentication and other functions to a multichannel MPEG4 core for the PC/104 form factor. Like the popular MPEG4000XLP, the MPEG4000WA accepts four live NTSC or PAL video input channels. The board is ideal for applications such as evidential video data collection where confidence in the source and authenticity of the original data is essential.

MPEG4000WA’s watermark authentication technology assures users firstly that their received data originated from an authentic source and secondly, that the data has not been subsequently tampered with. It uses a patented proprietary watermark algorithm which is sensitive, making any attempted interference with the data immediately evident. The algorithm is sensitive to most image manipulation operations including scaling, cropping, frame removal and insertion, MacroBlock swapping and others. Detection of spatial and temporal tampering is also possible. This includes the ability to detect any regions within an image frame that have been subjected to tampering.

MPEG4000WA’s watermark authentication algorithm employs a 128 bit HMAC-MD5 keyed Hash Authentication Code which can simultaneously verify both the integrity and authenticity of the transported data. Employing the MD5 hash function and nearly impervious to attack, this algorithm has been widely adopted in security applications. The watermark embedding is also adaptive to image complexity, eliminating any compromise of image quality.

The MPEG4000WA, utilizing a 32 bit PCI architecture, encodes up to four concurrent full-size realtime analog inputs from live PAL or NTSC video and audio sources using either MPEG4 or Motion JPEG (MJPEG) compression. It can also decode and playback MPEG4 or MJPEG video and audio recordings from storage to display. A Preview feature allows incoming video to be viewed on the host screen in parallel with the recording process. Audio/video synchronisation is provided on each channel, and text and graphics annotation can be superimposed on any channel using the high resolution text overlay function.

The MPEG4000WA can record 4 full size D1 inputs each at frame rate or each input at full frame rate but at size. The high performance video data compression and reduced bus utilisation allows up to four MPEG4000WA boards within a single PC/104-plus system, providing up to 16 concurrent video streams to disk.

Advanced Micro Peripherals is a leading manufacturer of embedded video solutions - offering the latest MPEG-4 / H.264 codecs and video overlay / annotation technologies on a wide range of embedded board form factors including PC/104, PC/104-Plus, CompactPCI and miniPCI modules. The AMP range of rugged, long-life embedded video hardware is matched with comprehensive software to capture, display and record from multi-channel NTSC / PAL video cameras. AMP also offers an extensive range of PC/104, PC/104-Plus and EBX format embedded PCs (SBC), communication controllers and power supplies to create complete (COTS) solutions for use in military and industrial grade digital video recorders (DVR), telemetry and transportation infrastructure. The product range is designed and produced by our highly qualified team of engineers from our headquarters near Cambridge in the UK and is supported by sales teams in the UK and United States.