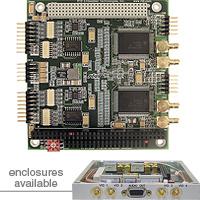 The VFG7330 is a versatile Audio/Video input board, useful for industrial monitoring and surveillance applications. It allows two Audio/Video streams to be captured simultaneously. Up to 8 video sources may be connected. Popular TV standards (NTSC, PAL, and SECAM) are supported. The board also supports stereo audio input.

Each input channel operates independently, and may be configured separately. An onboard PCI-to-PCI bridge allows the board to only require one PCI slot.

In addition to A/V capture, the board also features general purpose digital I/O. This digital I/O can be used to interface with various control equipment. Opto-isolation allows the I/O to be used in the presence of high voltages and current loops.

RTD is a founder of the PC/104 Consortium and an ISO 9001 and AS9100 certified company. RTD designs its products to withstand -40 to +85 C operating temperatures and severe shock and vibrations which are indispensable for the most demanding industrial, aerospace, transport, and military applications. From low power to high-end performance, RTD's product offering is the broadest in the industry. RTD specializes in the research, design, and manufacturing of PC/104, PC/104-Plus, PCI-104, PCIe/104 and PCI/104-Express compliant modules and systems, addressing intelligent process control, data acquisition and processing, adaptive signal processing, video capture, telematics, wireless, fieldbus, and power supply technologies. RTD's rugged packaging and system solutions include the IDAN®, HiDAN®, HiDANplus®, and FieldPad® and are available in standard and custom designs. Add in drivers, developed software environments, and example programs, RTD provides a clear one-stop, fast development experience with long lasting support for the embedded customer. All of RTD's products are manufactured in the U.S.A. at our facility and have seen use on every continent, in many oceans, at various levels of our atmosphere, and in space. A State of the art Automated Surface Mount Assembly System using X-Ray technology for inspection of BGA components along with Humidity Controlled Environmental Chambers highlights the effort taken to ensure a quality product.