Today oil and natural gas exploration and production is a highly complex, highly technical process involving the locating, drilling and pumping of raw materials from deep below Earth’s surface in some of the harshest of environments. Successful drilling requires taking highly accurate measurements while drilling, known as MWD or LWD. Today’s advanced MWD tools take a variety of real-time measurements, sending data to the surface continuously while the hole is being drilled. This allows for faster, more accurate, and safer drilling.

A leading worldwide supplier of MWD/LWD drilling performance products recently completed a technology upgrade of their MWD system’s surface controller and sensor units, which were based on two mid-range SBCs, each responsible for different applications. These SBCs were several years old and had reached their end of life. The requirements for the new system included a SBC with an Intel CPU that offered increased performance, a drop in replacement compatible in size with the current SBC, long product life, lower cost, and rugged features. 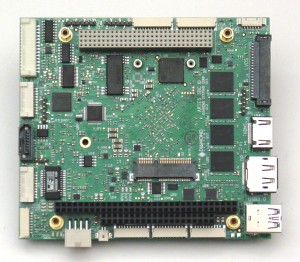 Diamond Systems’ rugged Aries SBC was an ideal choice. It met all of the system requirements, combined the functionality of four boards into one, met all of the harsh environmental requirements, saved the customer more money than expected, and provides a long term platform for the MWD system.

DIAMOND SYSTEMS CORPORATION, founded in 1989, provides compact, rugged embedded computing solutions to customers around the world in a wide range of industries. We deliver both board-level products and system-level solutions incorporating these products. Our expertise is in analog I/O technology, high integration, customization, and rugged design. Our embedded CPU boards provide a unique level of integration by incorporating data acquisition and other features right on the board, reducing size and cost. Our analog I/O capabilities include our patented, best-in-class autocalibration technology that reduces analog measurement errors by a factor of 10 over competitors' solutions.