Chesham, UK – 13th June 2016. Sundance Multiprocessor Technology Ltd., an established supplier and manufacturer of embedded modules, has announced that it has integrated Xilinx’s smallest Kintex UltraScale FPGA with its EMC2-family of embedded boards for the “OneBank®” PC/104-compatible format.

Sundance’s EMC2-family is a range of industrial-grade and deployment-ready PC/104 boards that feature either a Xilinx Zynq SoC or Xilinx Artix/Kintex FPGAs. The EMC2-KU35 is the latest member and has two banks of 16-bit DDR4 with close to 2Gbytes/sec bandwidth each. It also has four-lanes of PCI-Express and a VITA57.1 FMC-LPC module expansion for a range of COTS or bespoke I/O modules for custom expansion.

The FMC Modules has one high-speed serial lane, running at up to 12.5Gbit that could be used for a 10Gbit Ethernet module. It also has 34x pairs of low-voltage differential parallel lines for interfacing to “real-world” interfaces, like analog/digital signals or various camera interfaces.

The EMC2-family is designed to the latest, yet long-established, PC/104 small-form-factor 90mm by 96mm boards called “OneBank®” and, using PCI Express switches, allows an infinite number of boards to be stacked for very demanding applications. The typical board-to-board bandwidth is above 500Mbytes/s and peak bandwidth is up 2Gbytes/s using the “OneBank®” connectors, whereas a possible bandwidth to an FMC I/O module can exceed 6Gbytes/s.

“The evolution of Sundance’s EMC2-family of boards with either low-cost/low-power Artix-7 family or the fully integrated Zynq SoC with Dual-Core ARM-A9 has been significantly improved with the addition of the Kintex UltraScale family of FPGAs,” said Flemming Christensen, Managing Director of Sundance Multiprocessor Technology Ltd. “While the EMC2-Z7030 board with an ARM9 Zynq SoC is a single-board computer with some FPGA fabric for I/O and pre/post processing and is ideal for low-cost systems, the newly launched EMC2-KU35 provides a magnitude more performance”

The EMC2-KU35 can also combine with one of the many x86-based SBCs that are manufactured by PC/104 Consortium members. One such example is the Versalogic “Bengal” with Intel Atom E3845 quad-core running at 1.9GHz per core and supporting Windows 7 Embedded. Adding an FMC module with two Camera Link ports will provide interfaces to high-resolution and very fast cameras in a stereo-vision setup for autonomously controlled vehicles or planes.

The EMC2-family benefits significantly from the PC/104 stackable concept that allows multiple boards to be integrated into a multi-processing system using PCI Express or Ethernet for inter-connection between each board in the system for a heterogeneous and asymmetrical computing platform. The concept is being developed by Sundance as part of $100 million industry-wide EU R&D program into Embedded Multi-Core Systems for Mixed Criticality, the Artemis-EMC2 Project

The EMC2-KU35 is priced at $3,225.00 for the extended industrial temperature variation and medium speed-grade of FPGA. Slower, faster and commercial variations are available. The 100+ price is below $1,800.00. The EMC2-KU35 and its variations are typically available on a lead-time of one to three weeks. 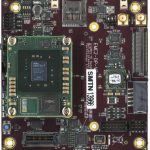 Sundance is a leading provider of advanced DSP, Multicore, FPGA and reconfigurable COTS systems that are configurable to suit all high-performance embedded computing and modular signal processing applications, enabling rapid prototyping and deployment of rugged embedded systems. Designers and manufacturers of wireless infrastructures, satellite communications, industrial signal processing, sonar/radar, Software Defined Radio (SDR), multimedia and telecommunications depend on the flexibility of Sundance's mixed DSP & FPGA platforms to get their products to market FAST! Key facilities are located in the UK and mainland Europe, and our worldwide network of agents provides quality service and support.